Lantana is not yet well known, but it is gaining a reputation for itself for managing resistant forms of bacteria. Traditionally, the leaves are used to reduce everything from itching to leprosy and scabies. Though it is regarded by many as anti-viral, not much is known about the safety so the suggestion would be to limit use to short-term, small amounts and topical application only.

What is interesting about Lantana Essential Oil is that the aroma spans the spectrum of “notes” from a first impression of top citrus-like impressions to middle and base notes that are more leafy, fruity, and resinous.  It is thus used to promote alignment between dimensions, such as emotional discouragement, ego ambition, and soul inspiration.

It has therapeutic benefits when inhaled because it loosens phlegm and relaxes breathing.  However, because it contains ketones, long-term use is not recommended.  It is also not intended for internal use, but makes a very good wound healing preparation since it stops bleeding and reduces the risk of infection and scarring.  It should be diluted before using on the skin.

Lantana is a member of the verbena family and flowers come in many colors, usually mostly yellows, oranges, and reds, but they can be white or lavender.  Usually, the yellow and red varieties are used in distillation. 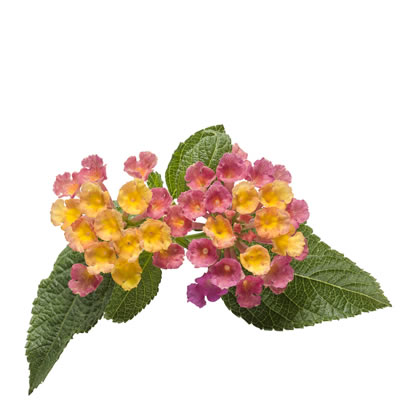 It should not be used long-term nor by small children or pregnant and lactating women.