Armoise is the newest artemisia to be added to our product line.  It also goes by the name of White Wormwood because its hairy leaves reflect sunlight and give the plant a silverish appearance.

Though essential oils are not the same as herbal extractions, this plant is often called by the same names as Artemisia absinthium, the plant used to make Vermouth, Absinthe, and ever so many different digestive tonics.  It is confusing to many people that the two to four hundred artemisias are often discussed as if they were all the same.  To lessen the anxiety around this common error, it might be prudent to see a spectrum ranging from tarragon to the wormwood of  Green Fairy fame.  However, even if the thujone content is quite high, as with wormwood, most of the bizarre behavior associated with Bohemians in the 19th century is now attributed to alcoholism rather than absinthe which is once again legal in most countries.  This said, mugwort, another artemisia, is supposed to aid lucid dreaming.

Classifying Armoise is a little challenging.  It is thought by some scholars to be the wormwood of the Old Testament, it rather than A. absinthinium, largely because it grows best in relatively arid climates in North Africa, but our plant material comes from Austria, not the desert.

We know it is a highly effective parasiticide for a wide range of different kinds of parasites. It is also a good digestive aid and is rich in antioxidants.  As with most oils, caution is always advised if pregnant or nursing. There may be interactions with diabetic medications since Armoise tends to reduce blood sugar and promote urination.

Like Mugwort, Armoise is supposed to promote dreams and reduce problems associated with the female reproductive system.  It is also used to calm people who are nervous to the point of hysteria.

The art of blending oils depends on a combination of the desired effect and the synergy of the oils.  For example, if digestion is the issue and the main concern is parasitic infection compounded by irregularity and pain, try Rhatany and use a tiny bit of Neem Oil and Almond Oil as carriers.  If applying topically, consider Jojoba Oil for the carrier.  If seeking the spiritual benefits of Armoise, think of Tulsi Essential Oil, perhaps with a drop of Calamus Oil, and use Brahmi Oil as the carrier, diluted in Almond Oil or even Ghee.

The oil has a complex aroma, woody but sweet, like a fragrant forest.  It would be exquisite with a hint of lime or yuzu and perhaps a tiny bit of pine. 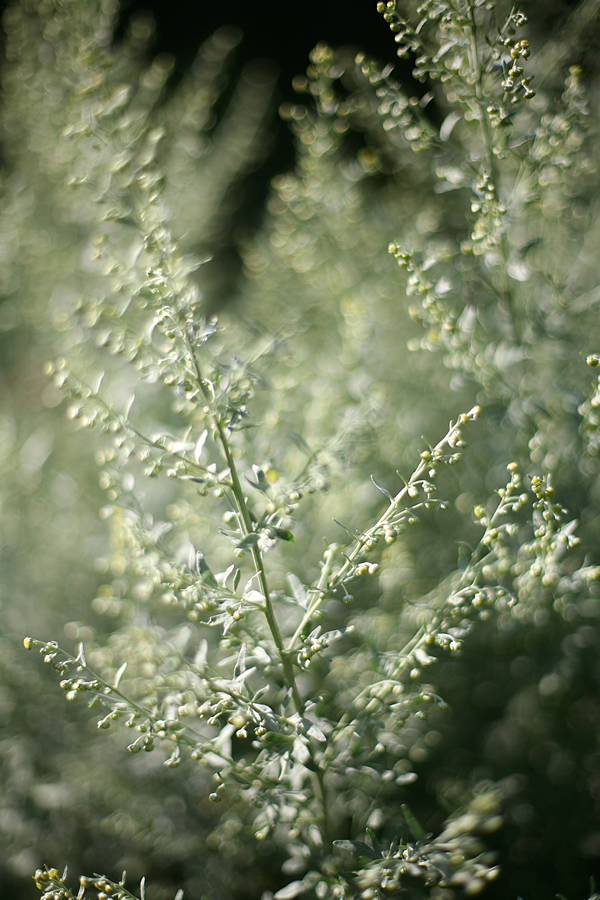 Armoise oil should not be used by pregnant or nursing women.

Whether for internal or external use or in diffusing, the oil should be diluted to 1-2% of the total volume of the carrier oil.